Wolverhampton Wanderers have made a bid for Santos striker Kaio Jorge, according to reports.

The news doesn’t come from the Brazilian or the English media. It’s actually claimed by the Portuguese press, where newspaper A Bola seems to have some exclusive information.

The outlet writes that Wolves made a ‘strong step’ by offering €15m for the youngster, with Santos wanting €20m. Bruno Lage is said to be an admirer of the 17-year-old since the time he worked at Benfica.

That’s why the Lisbon side are one of the clubs who are in the race as well, just like Chelsea and Juventus. 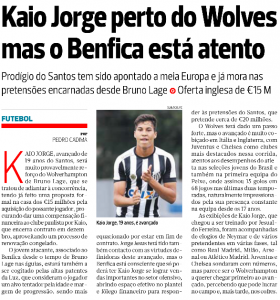 Kaio Jorge has 15 goals in 72 appearances for Santos so far. His contract expires at the end of the year, and with his renewal process being complicated, he should be available to sign a pre-contract with any club next month. Wolves’ strategy to make a bid now only means they’re trying to win the competition by moving first.

Despite A Bola’s report, the Brazilian media is still to confirm the move made by the Molineux side. The only outlet who seems to have gone after the story is ESPN Brasil, who claim that Santos haven’t received any official bids for the teenager yet.