Home Europe Wolves interest in player backed up again, his future could be in...
SHARE

It was also reported Wolverhampton Wanderers have submitted an offer for the forward, who wants to sort his future out before Los Rojiblancos travel to the United States for preseason on Monday.

Thursday’s edition of Spanish newspaper AS once again backs up the interest from Nuno Espírito Santo’s side. Tottenham, Napoli and AC Milan are also interested in the Argentine.

The 24-year-old’s desire to leave the Diego Simeone’s side is further stressed in the report.

It’s claimed that he is also attracting interest from clubs in Italy and Spain, but joining another club in the La Liga apart from Real Madrid and Barcelona could be ruled out due to his net salary of €4m-a-year. 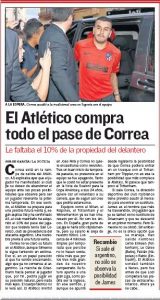 AS suggests the player’s future could be in one of the top European leagues, which is why they point out in England.

Meeting Correa’s current salary should not be an issue for Wolves, if they are keen on acquiring his services.

“It’s done” – Chelsea to Chelsea presented as agreed, announcement will...