Home Europe Player has offer from Wolves, intention is to complete a transfer before...
SHARE

Angel Correa has asked to leave Atletico Madrid in the summer transfer window, claims AS on Wednesday.

It’s reported several clubs have called the La Liga side to ask about the forward’s situation and Wolverhampton Wanderers are one of the clubs who are interested in the 24-year-old.

Another Spanish newspaper Sport also claims the attacker has asked to leave Diego Simeone’s side and Los Rojiblancos have received several offers for Correa, including that of Nuno Espírito Santo’s side.

Wolves are planning to strengthen their attacking division for next season and the Argentine is an ideal candidate due to his willingness to leave Wanda Metropolitano in the summer transfer window.

Correa is aware his playing time will be further restricted following the arrival of Joao Felix and Ivan Šaponjić, which is why he believes his time with the Spanish capital club has come to an end. 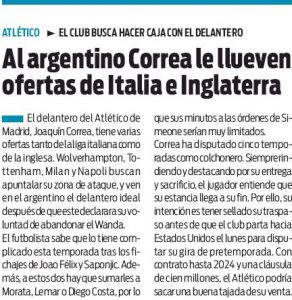 Atletico will travel to the United States for their preseason tour on Monday and Sport claims Correa’s intention is to leave the club before his team travels to the US.