Barcelona midfielder Andre Gomes is aware his manager Ernesto Valverde doesn’t count on him and that he has no future at the Camp Nou.

Mundo Deportivo now backs the Portuguese international to make a switch to England in the last few days of the transfer window, despite suffering an injury in a preseason friendly fixture.

Tottenham Hotspur and Arsenal were linked with the 25-year-old, but a move to north London seems difficult as of now. West Ham United are considered the ‘most serious’ club working to sign the former Benfica man.

Gomes is aware the market in England closes on Thursday and is now ‘waiting for the news’ to see if he will play in the Premier League next season or not. 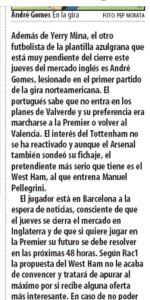 RAC1 claims (as mentioned by Mundo) the Hammers have already made a proposal for the player, but their offer ‘doesn’t convince’ the Catalan club, who will wait and see if they receive any more offers.

If Manuel Pellegrini’s side decide against improving their offer, then a move to Valencia would be Gomes’ first choice.