On November 23rd, we carried a report from Corriere dello Sport explaining Real Madrid have offered Mariano Díaz to West Ham United on ‘loan with a right of redemption’.

Corriere’s claims were covered widely this week. And it’s now time for Sport to give their view.

The newspaper provides their own information on the 27-year-old’s situation with the La Liga winners.

It’s claimed AC Milan and the Hammers are ‘behind’ the striker, who started for Zinedine Zidane’s side in the last two matches and also scored in his side’s 1-1 draw against Villarreal.

Having rejected opportunities to leave the Santiago Bernabéu in previous windows, his future is now ‘written’ as those at the Madrid based club are of the belief Mariano is not what they need.

The player starting the last two matches is a ‘way of putting him on the market’, but Sport warns the frontman continues to have the ‘last word’ on any potential transfer.

Mariano is beginning to understand it’ll continue to be ‘very difficult’ for him at Real Madrid as he knows his ‘future is determined’ no matter what he does. 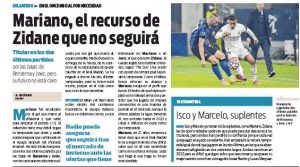 The report adds no one at the Spanish side is ready to give assurance the player will be at the club after the mid-season window.

West Ham have been regularly cited as a potential suitor and with Mariano now understanding it’ll be difficult for him at Real Madrid, he could leave them for the second time in January.