Spending all of his career club hopping, Gaël Kakuta really wants to settle down at a club for once and just enjoy himself.

Currently contracted to Hebei China Fortune, the former Chelsea starlet spent the current season on loan at Amiens in France where he had a relatively good season, with six goals and six assists in 35 appearances.

According to Le Foot, his performances have caught the eye of a number of clubs, including West Ham in England.

The magazine explain that, as well as the Hammers, Monaco and Nice have also come forward to ask about the 26-year-old’s situation, but their ‘managerial incertitudes’ mean negotiations could be slowed down. 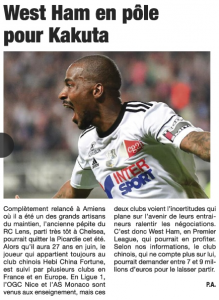 While it might seem ironic that Le Foot then go onto explaining West Ham are therefore ‘in the lead’ when they are currently without a manager, it’s worth pointing out the article was published on May 12th prior to David Moyes leaving the club.

This means there’s a good chance that, if this information is correct, Kakuta was a target for the Scottish manager, meaning whoever replaces him might not be interested in the Hebei China Fortune forward.

Either way, should they still pursue their interest, West Ham would need to pay somewhere in between €7-9m to acquire Kakuta’s services.