Last week, Sport reported the Hammers could table a ‘more attractive economic offer’ to sign the left-back in the winter market.

Four days ago, the same outlet explained the La Liga side are looking for around €22m to grant the move.

Tuesday’s edition of Sport once again talks about West Ham’s interest in the 24-year-old.

It’s claimed David Moyes’ side ‘called’ Barcelona for the fullback in recent weeks, which presumably means they picked up the telephone, but he ‘prioritised the possibility of playing’ for AC Milan. The Serie A side are also interested in taking him in January.

According to the report, Milan want to take Junior on a six-month loan deal with a purchase option in excess of €20m.

The ‘agreement was close’ before the Catalan club’s sporting leaders and Ronald Koeman ‘rejected’ the option for the player to leave the Camp Nou.

That’s because the ex-Everton manager believes Junior can have more minutes in the second half of the season due to the ‘very demanding schedule’. 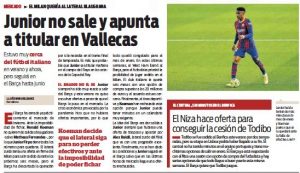 Barcelona’s initial idea was to offload Junior and bet on Alex Baldé as a backup for Jordi Alba.

However, the conditions have not been met and therefore, Junior will continue at the club, unless they an ‘irrefutable offer arrives’.

Given Barcelona’s financial sale, in reality it’s likely they can’t refuse any reasonable offer for a player who isn’t crucial.