Still in the hunt for direct promotion to the Premier League despite a slip up against Sheffield United at the weekend, Marcelo Bielsa’s Leeds United continue their impressive season on March 30th against Millwall at home.

Taking over before the season started, the Argentine has surprised many so far with the way he has reinvigorated the Championship side as few expected the club to be this close to the top in his first campaign in charge.

It hasn’t been a season without controversies either, as the well-documented “Spygate” cast a brief shadow over Bielsa’s work, only for the manager himself to set everyone straight with an impromptu lecture on his behind the scenes work, showcasing just how much work goes into every fixture.

It’s this work ethic that has made the Leeds manager somewhat legendary in the world of football, and his older brother, Rafael, a politician who was Argentina’s Minister of Foreign Relations between 2003-05, compared him to an artist in a long chat with newspaper La Nacion.

He said: “They [artists] are victims of their own style. Marcelo demands everything from everyone all of the time because he gives everything all of the time. In a way, you have to think of it as empathy, putting yourself in the place of another. And I don’t know if it’s for football. 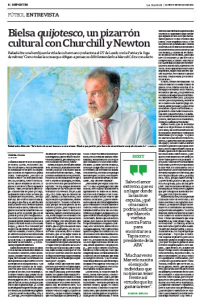 “It’s more. He’s so unforgiving about it that he holds himself back. He arrived in Leeds in August? Well, in December I asked him: ‘How’s Leeds?’. He replied ‘I don’t know, I haven’t been. I’m going to go’.

“You want to peek in his essence? Never will he allow intelligence, which is an elevated form of cleverness, to take precedence over his sense of duty. Never.”

Unlike many other managers, despite all his work, Marcelo Bielsa, award wise, has very little to show for his career so far.

A 2004 gold medal at the Olympics with Argentina and three Apertura/Clausura titles with Newell’s Old Boys and Verez Sarsfield fill his trophy cabinet. That’s it.

Despite this, Bielsa remains one of the most respected figures in managerial circles, and Rafael points out that a lack of public recognition doesn’t necessarily mean an unsuccessful career.

He explained: “The writer Sándor Márai or the poet Julius Fučik with ‘Notes from the Gallows’… Guys who reached expressive peaks but in their time went unnoticed. Why? Because they didn’t win any public awards. Look at Primo Levi, the author of the best work on the concentration camps; his first book, ‘If This is A Man’, published in 1952, sold 600 copies. A failure, no?

“And what will Marcelo be able to say? Like Neruda, ‘I confessed that I lived’. Yes, he hasn’t won, for now: Why is it that to live, which is a failure for everyone in the end, triumph needs to be the governing factor?

“For Marcelo, losing hurts him like everyone else, not because he didn’t get three points, but because his idea of life was sullied. They want to condemn him? Let them, but the guy has more depth.”

From South America: Steve Bruce ‘more out’ of Newcastle United than Miguel Almiron