On Thursday, we covered a blog post from Brazilian journalist Jorge Nicola in which he claimed to have confirmed Crystal Palace’s interest in signing Gabriel Barbosa.

Now he brings a more complete story on his YouTube channel, saying there are currently three clubs competing to get the Inter Milan striker in January.

Flamengo, who have him on loan until December, are one of the sides interested, but they’ve shown the Nerazzurri they can pay only €20m.

Meanwhile, Crystal Palace and Schalke 04 have both let Inter know they can pay €30m for Gabigol. They would also leave the Brazilian side behind since they can pay bigger wages.

Nicola claims the information came from someone who’s ‘very close’ to the player, from ‘his daily life’, who ‘helps him in his decisions’.

Gabigol doesn’t want to sort his future now. The 23-year-old is said to be focused on the Brazilian League and the Copa Libertadores, and has told his agent not to open negotiations with any of the clubs.

So whoever wants him, will have to wait a little, including Crystal Palace and the club he’s currently at, Flamengo.

The striker has been in prolific form this season, scoring 19 goals in 19 appearances in the Brazilian Série A, as well as assisting teammates four times. 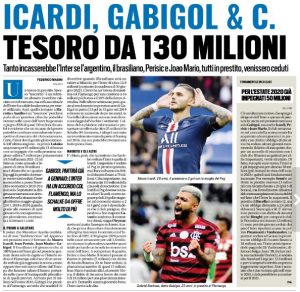 Italian newspaper Tuttosport has an update on Gabigol’s situation as well. They don’t directly mention Crystal Palace, but talk about the possibility of Inter Milan selling him to a European side.

It’s claimed the Nerazzurri had a ‘broad agreement’ to sell him to Flamengo for €16m, keeping 20% of a future sale. However, due to the striker’s recent form, European sides have been making approaches for his signing.

Only Schalke 04 are named, with Tuttosport saying they’re offering €25m. So the stories in Italy and Brazil continue to be similar, although the numbers are differing a little bit.