The midfielder has been linked with a move to the Premier League side in recent months.

The Turkish newspaper report due to financial difficulties and already having Jose Sosa, Juraj Kucka and Ogenyi Onazi at the club, the Trabzonspor board are considering cashing in on Yokuslu. 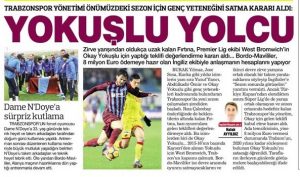 We covered reports from the Turkish press last November that West Brom were interested in signing the 23 year old in the last window, but their bid of €8m was reportedly rejected by Trabzonspor.

The Turkish side’s president Muharrem Usta at the time informed the English side to come back at the end of the season, as he wasn’t willing to sell Yokuslu in January.

One of the few positives for Trabzonspor this season, his performances have been recognised by Turkey manager Mircea Lucescu.