Valencia face Russian side Krasnodar in the Europa League on Thursday.

Ahead of the match, Spanish publication AS interviewed the Russian club’s left-back Cristian Ramírez.

The 24-year-old left South America and moved to Europe in 2013 when he joined German club Fortuna Düsseldorf. After a few loan spells, he joined Hungarian side Ferencváros in 2015 before moving to Krasnodar in 2017.

Prior to his spell at the aforementioned clubs, the fullback had trials at Borussia Dortmund and Tottenham Hotspur. Ramírez revealed the north London club were keen on signing him and explains why the transfer collapsed.

“Tottenham wanted me as a youth, but because of the regulation I could not go. With Tottenham I could not sign, because at that time I still did not have the necessary matches with my national team,” the player explained.

With regards to a switch to the Signal Iduna Park, Ramirez said: “I was a youth. With the Dormund I did not sign because my club in Ecuador didn’t want to reach an economic agreement.” 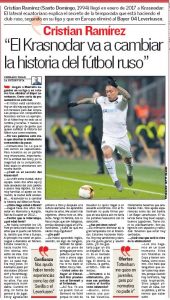 The South American has been featuring regularly for Krasnodar on the left side of the back four. Ramirez’s contract with the club runs down in 2021 and he’s opened the door for a future move to Spain.

There was no indication from AS to suggest whether Tottenham remain interested in the player.