Turkish newspaper Sabah report Fenerbahce are looking to sell their Kosovan striker Vedat Muriqi, with Tottenham Hotspur said to be interested in his services.

The Kosovan striker has been in impressive form in his debut season at the Turkish giants, and that has reportedly led to interest from the North London side.

Along with Tottenham, Sabah claim Serie A clubs Napoli and Lazio are also interested in signing him, with Fenerbahce hoping to sell the 26 year old to the highest bidder.

Fenerbahce’s transfer operations for next season will depend on Muriqi’s sale, as the Yellow Canaries are under strict controls because of FFP and the Turkish Football Federation’s spending rules. 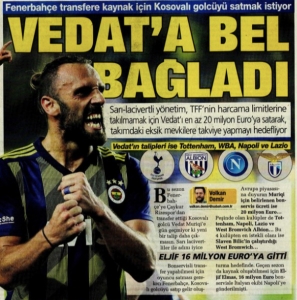 It’s reported that the Turkish club value Muriqi in the region of €20m and will accept any bids from the interested clubs if they meet this.

Muriqi has scored 15 goals in the Super Lig for Fenerbahce this season and he’s under contract at the Ulker Stadium until June 2023.