Last week, France Football revealed Georges-Kévin N’Koudou’s transfer from Marseille to Tottenham wasn’t something Mauricio Pochettino was aware of until he was told about it.

The deal was one negotiated between Spurs’ chairman Daniel Levy, and then Marseille president Vincent Labrune.

One deal, however, which Pochettino probably did have something to do with was Clinton N’Jié going the other way.

The Cameroon international never really adjusted to life in the Premier League, and instead of watching him rot on the bench or in the reserves for another season, the 24-year-old was sent back to France on loan, with an option to buy. 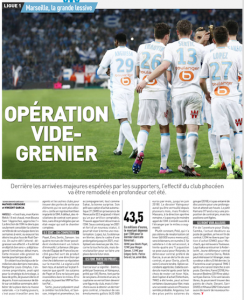 The clauses in his deal have remained rather secret, with just the amount (€7m) appearing in the press, yet it seems L’Equipe have found out a little bit more, with the French newspaper claiming on Tuesday that the option to buy the player permanently has already been triggered by Marseille.

Whether that was done automatically via appearances/goals is unknown, but L’Equipe are pretty certain of one thing, and that is Clinton N’Jié will not be a Tottenham player next season.

They explain that while the clause has been triggered, the forward could still leave Marseille in the summer, but a second season with the Ligue 1 club is ‘probable’.

N’Jié has been used sporadically by Rudi Garcia, but his versatility is something the manager appreciates, and while his stats this season aren’t the most impressive (four goals and an assist in 20 appearances), there have been brief glimpses of the player who left Lyon for £12m in 2015.