Tottenham will have the chance to sign Giovani Lo Celso permanently in January, for less than he will cost next summer.

Spurs completed the signing of Lo Celso from Real Betis in the summer transfer window after several months of protracted transfer talks.

Those talks were extended as a result of Tottenham’s attempts to drive down Lo Celso’s asking price and pay a more acceptable fee, at least for them.

In the end, they agreed on a loan deal for the 23-year-old, which includes an option to make the move permanent for €40m next year.

However, according to ABC Sevilla, they can save themselves €8m if they decide to activate that clause in the January transfer window.

The newspaper explains that in the agreement between the two clubs, there was a clause that stated the fee to sign him permanently changed depending on the date.

If Tottenham activate the purchase clause in January, they only have to pay €32m, with that price set at €40m in the summer transfer window.

Spurs have already paid €15m to sign Lo Celso on loan, and the newspaper says Betis are convinced that those in charge at Tottenham will ‘close the transfer’ in January to save themselves money.

They would not only receive money early but avoid ‘uncertainties’ that may make Spurs reconsider signing him in the summer. 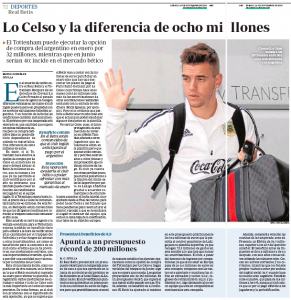 It would also allow them to strengthen in January, something they are keen to do after a disappointing campaign.

Whether Daniel Levy is interested, remains to be seen, although he surely won’t pass up the opportunity to save money.