Mundo Deportivo love fluffing the feathers of Barcelona and claiming many players are offered to the Catalan club.

Some of it is likely to be true but sometimes it can feel forced, a good player presented as being desperate to join Barca, and the club either not being interested, or considering their options… keeping the footballer and his agent hanging.

That’s the case with Benjamin Pavard, according to the Catalan newspaper.

In their Monday edition, Mundo Deportivo use their ‘Top Secret’ column to claim that Pavard is the latest in a long line of players to be offered by their agents.

The right back is considered ‘interesting’ and the prospect of a transfer from Stuttgart hasn’t been completely dismissed, it’s something under consideration. 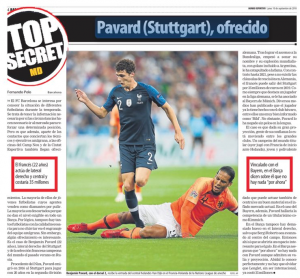 summer 2019 market, and whilst Bayern Munich are held aloft as competition it’s not thought anything has been agreed yet.

Mundo Deportivo believe the only way a transfer makes sense is if Sergi Roberto reverts to being considered solely as a midfielder.

Manchester United have made €55m bid for player – Deal ‘remains’...

West Ham talks for forward yet to ‘come to fruition’ –...