Earlier in April, Ilaix Moriba’s father revealed the midfielder turned down an approach from Chelsea before he last signed a three-year contract with Barcelona in 2019.

The 18-year-old has less than 12 months left on his current deal and hasn’t signed an extension so far. His situation has caught the west London club’s attention, according to the reports from England.

Claims made in the British press has reached Spain and AS give their own take on the player.

The La Liga side want to extend his contract, but Joan Laporta is ‘inflexible’ due to the need to reduce the club’s salary budget.

Moriba’s refusal to sign a new deal has seen Barca make him train with their youth team. This has resulted in a tense situation and has also alerted clubs in the Premier League, where he is eligible [as per new Brexit rules] to play.

AS state the teenager’s representative received ‘two important calls’ and one of them is likelier to be from Thomas Tuchel’s side. 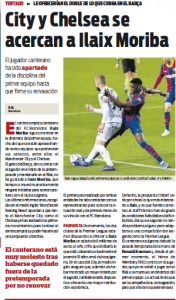 Friday’s ediiton of Sport also provide their information on this case.

The report claims the Champions League winners contacted Moriba’s agent to know first hand about their client’s situation at the Camp Nou.

Barca are working to lower their players’ salaries and at the same time are facing difficulties to renew Moriba’s contract.

Moriba ‘doesn’t want to renew’ and is ‘very upset’ the club has left him out of the first team training for refusing to sign an extension.

Time’s running out for Barcelona as their failure to quickly tie down Moriba to a new deal could see them risk losing the player for nothing next summer.