Home Europe Striker wants PL move – Had belief he was off to West...
SHARE

After losing 1-0 to Ivory Coast last night, Mali have been knocked out from the Africa Cup of Nations in the round-of-16.

For the Portuguese press, that result can only mean one thing: it’s time for Moussa Marega’s future to be decided.

The player’s wish to make a Premier League move has been public for a long time, with West Ham the most linked club, and as reported by A Bola today, his future is totally ‘open’.

It’s claimed Marega will have a few days of vacations, and then join Porto’s squad. The club continue to promise that he’s leaving in case a convincing bid arrives from England, but they’ve got nothing so far. 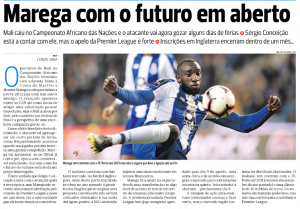 A Bola adds that Marega’s expectations shouldn’t last long, since the Premier League transfer window closes in a month.

It’s interesting how West Ham are not named in the story this time. At the end of last month, the very same A Bola claimed that the player believed he would be signing for the club.

‘According to information already received by the footballer himself, the next stage of the career will be played in English territory and particularly at West Ham”, said the newspaper at the time.

Given it now looks like West Ham’s move for Maxi Gomez has collapsed, this potential transfer looks like it could rise.