Correio da Manhã continues to be the only Portuguese newspaper which is still pushing for Bruno Fernandes’ transfer to the Premier League.

Although it had been usual to see the likes of Manchester United and Tottenham Hotspur, mainly the former, named in all local outlets for the past couple of months, it’s much quieter now.

But Correio da Manhã insists a little, they keep the flag flying, and today, it’s claimed that the Fernandes should miss preseason games due to his expected transfer to England.

It’s said that manager Marcel Keizer has been handling the player ‘with tweezers’ and the midfielder should not be used tomorrow, in the friendly against Rapperswil-Jona, so he doesn’t get injured. 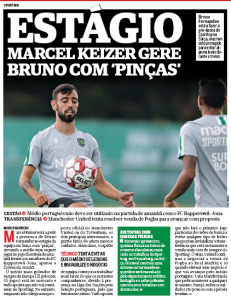 Correio da Manhã says that Manchester United continue to negotiate the sale of Paul Pogba to Real Madrid, and the Frenchman’s move could happen ‘at any time’.

That’s why Sporting are being so careful with Fernandes, who’s said to be the Lions’ ‘pearl’.

This could well be an educated guess from CdM, and an excuse for them to continue the claims. That said, if Bruno and Sporting are confident a transfer could happen, having him sit out a friendly seems a reasonable step to take.