Apart from the massive uproar when Leicester City decided it was time to call it a day on the Claudio Ranieri era at the King Power stadium, very little has been written about the Italian manager when it comes to what he could do next.

Except from welcoming two BBC Leicester journalists into his home for a shot of espresso and a brief chat, the Italian manager has kept rather quiet.

Probably using this time to catch up on sleep, Ranieri could end up returning to management sooner than expected, at least according to Gazzetta dello Sport on Friday, with Stoke and Southampton potential destination. 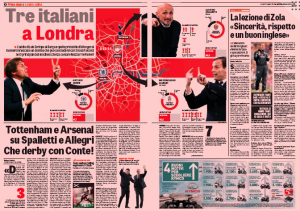 The Italian newspaper, who are very fond of the Tinkerman, briefly list out his options now that he has returned to his house in London.

They explain a job in the capital would be ideal for the 65-year-old, but other clubs could come knocking.

Gazzetta explain that Southampton, who changed managers at the beginning of the year, could look at Ranieri if the French man exits for another job or gets sacked (which seems doubtful).

Considering the Saints put a lot of research in their managers, and prioritise bringing in people to St Mary’s who favour the promotion of youth, the former Leicester man doesn’t seem to fit the bill.

Another option is Stoke City, who Gazzetta say are looking for an ‘international feel’ for their next manager, clearly suggesting time could be running out for Mark Hughes at the bet365 stadium.

Considering Southampton reached, and should have won, the League Cup final this season, and Stoke are still on course for a top half finish, an exit for either manager seems unlikely.

Stranger things have happened in football, however, like Leicester lifting the Premier League trophy last season.