Wesley Hoedt’s return to Italy on loan from Southampton simply hasn’t worked out.

Despite some relatively solid debuts, the defender has been at fault for a couple of important losses under Simone Inzaghi this season, including the club’s elimination from the Coppa Italia against Atalanta.

He’s been dropped a number of times only to return to the starting line up out of pure necessity shortly afterwards, but the general consensus is he’s been a ‘flop’.

That’s what Corriere della Sera label him as in a big article surrounding Lazio’s failed summer transfer window, with the likes of Vedat Muriqi and Mohamed Fares barely featuring, while Hoedt and Mateo Musacchio have failed to convince when called upon.

It’s explained the latter of the two aren’t necessarily ‘the worst’, but they are the ‘most obvious’ of the two, since they have been thrust into the spotlight, while the others have remained in the shadows, barely even touched by Inzaghi. 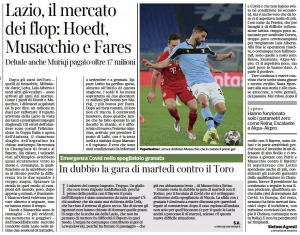 Despite all this, their director of football ‘continues to be convinced that the choices are right and deserve credit’, adding ‘he has no second thoughts or regrets’ over his decisions.

Only time will tell, but the fans are ‘disappointed and partly angry’, which is never a good sign.