Probably under the orders of Carlos Carvalhal, Sheffield Wednesday is one of the English clubs who have been keeping an eye on Portuguese sides this season.

The Owls’ scouts had already watched Benfica twice in the league, against Braga and Portimonense, and now got to a new level by scouting their last night’s Champions League game against Manchester United.

The report is made by Record today, who claims Carlos Carvalhal whould be watching the Red Devils’ performance, although the scouting history tells otherwise.

As Wednesday haven’t really been linked to any Benfica players recently, it’s hard to tell who would they be keeping an eye on, and last night’s game wasn’t very positive for the Portuguese side anyway.

The game and possible targets

The Eagles had a good start in the match, but were quickly controlled by Manchester United, and could barely create attacking plays. That’s why the team’s defence was the only positive point, especially because the only goal conceded just happened because of Mile Svilar’s mistake.

Three Benfica players were much praised by the Portuguese media: Luisão, Ruben Dias and Alex Grimaldo. But considering the potential of the latter two, it’s hard to imagine them making a move to the Championship.

Luisão is a different case. Getting close to the end of his career, the Brazilian defender isn’t an unanimity among Benfica fans, and was even linked to a move to Wolves recently.

The Wolves links seemed strange, but came about as part of the club’s Portugal strategy, which now sees Nuno Espirito Santo as manager. 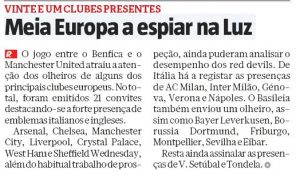 The list of scouts who watched the game was quite big, and even Record highlights it by saying ‘half of Europe’ were there.

Luisão is one of few credible targets for Sheffield Wednesday, especially after the Wolves links, but it could be that Carvalhal’s spies were simply there on a freebie, watching for pleasure.