Davy Klaassen’s one and only season at Everton was an absolute disaster for the player.

Signed under the Ronald Koeman tenure, a lot was expected of the former Ajax star and he wasn’t able to show he’d been a worthy signing.

Things didn’t get any better after the Dutch manager left, and Klaassen’s days at Goodison Park looked numbered for some time. Still, his agent insisted in the summer than the midfielder wouldn’t be leaving, determined to show he could make it at Everton and hadn’t been a flop.

That all changed when Werder Bremen came in for the player and were happy to break their transfer record, parting with €13.5m, in a move that raised the eyebrows of the more critical followers of the German club.

Things have worked out rather well since the Everton exit. A good preseason has been followed by a steady start to the current campaign.

Delmenhorster Kreisblatt report that ‘the running miracle’ has so far covered more ground than anyone else in the Bundesliga, notching up 62.67km in five matches. 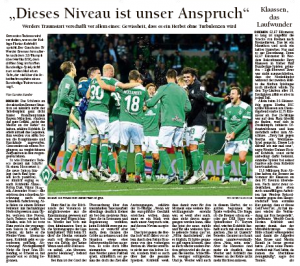 Whilst it’s conceded his performances have been up and down, it’s stated the footballer’s performance against Hertha Berlin this week is proof he’s worth the money sent to Everton.

“His teams are going through fire for him” – Defender hails...

Club have ‘€15m offer’ from Southampton for defender – ‘Exchanges could...