Tottenham Hotspur’s attempt to sign Luis Diaz from Porto was sort of an alarm for other Premier League clubs who’d been interested in the winger.

Since the bid was made, the Portuguese media points out that there are other interesting destinations for the player in England, with Liverpool being named as one of the main competitors.

That’s once again the case today. A couple of newspapers says that while Spurs try to convince Porto of accepting an offer, there could still be a chance of an effort made by other Premier League sides.

Newspaper Record claims there’s a ‘real possibility’ that Liverpool present a bid until Monday, which is the deadline for the January transfer window. 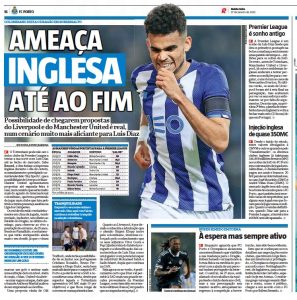 It’s said Jurgen Klopp’s admiration for Diaz is ‘well known’, with the interest ‘reinforced by the knowledge’ of his assistants Vitor Costa and Pep Lijnders.

They claim Diaz has the characteristics to replace either Mohamed Salah or Sadio Mane.

According to Record, the Colombian dreams of a move to the Premier League, where several clubs have been linked to him in the past.

His intention is to join a club who fight for the title and have constant presence in the Champions League, and that definitely could give Liverpool and advantage over Tottenham.