Rodrigo Riquelme is one of the most talented youngsters at Atlético Madrid and Reading are interested in taking him on a loan deal this summer.

Mundo Deportivo reported on Friday the Royals are ‘optimistic’ over signing the winger after he signs an extension with the La Liga side.

Marca now explains that Diego Simeone’s side have tied down the attacker to a four-year contract, which includes a €60m release clause.

With Atlético having already secured their youngster’s future, Reading are now stepping up their efforts to take him on a temporary deal. The negotiations between the two clubs are in the final stages.

The Madrid-born winger will be part of Los Rojibalncos’ first team once he returns from his loan spell at Madejski Stadium.

He made his first team debut for Atlético last September and went on to add one more appearance last season. Riquelme was not included in Simeone’s plans, and that had slowed down the negotiations for a new contract.

With only a year left on his earlier contract, the player was set to move out, with clubs in the the Netherlands, Scotland and Portugal tabling important offers to sign him.

Atlético had to take a decision whether to cash in from his sale this summer or let him leave as a free agent in 2021. Miguel Ángel Gil Marín and Andra Berta had to act fast, and Reading’s entry made things easier for both the Spanish side and the wideman. 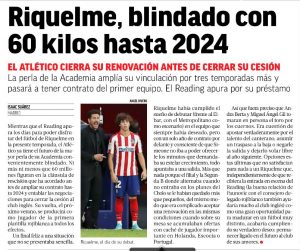 The good relationship between Paunović, who represented Atlético during his playing career, and Miguel Ángel Gil Marín, has helped Reading ‘a lot’ in this transfer.

A loan move to Reading helps Riquelme experience first team football and also stay associated with his parent club. Atlético, on the other hand, have managed to secure his long-term future.