The Alex Telles to Wolves rumour only had a few hours of life, and was quickly dismissed by both fans and press.

It was quite surprising to open a Portuguese newspaper this morning and see the left-back linked to Wolves.

O Jogo covered these ‘reports from England’ saying Telles is wanted by Manchester United, Chelsea and Wolverhampton, even though they didn’t believe the last story much.

The newspaper claimed that the news about the Championship side ‘couldn’t find much echo’ in Portugal, especially because there are clubs in the race who are much richer than Wolves. 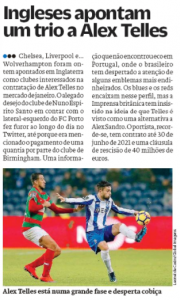 We had a look at where these rumours started, and there’s a pretty good reason why they didn’t get any strenght in Portugal.

It was first reported by a fake account, and backed up by a couple of other minor accounts. That’s why when Wolves fans started asking if the story was true, others were quick to point out that the source wasn’t the best.

Currently with a €40m release clause, Telles is having a fantastic season for Porto, and it shouldn’t take long until he gets a big bid from Europe’s major clubs. Juventus and Chelsea are the two who continue to be constantly linked to him.