Wolverhampton Wanderers’ chase for the Benfica striker Carlos Vinícius is on the front page story of Portuguese newspaper Record today.

The outlet says the Premier League side have ‘reserved’ an amount of €60m for the signing of the 25-year-old.

The reason for such investment is that Wolves consider it ‘practically guaranteed’ that Raul Jimenez is leaving the club at the end of the season.

Record claims that Wolves already had a deal to sign Carlos Vinícus last summer, and were supposed to pay Napoli the same €17m as Benfica did.

However, he couldn’t get a work permit by then, and his great season for the Eagles has changed his status now. He has 20 goals and 12 assists this season. 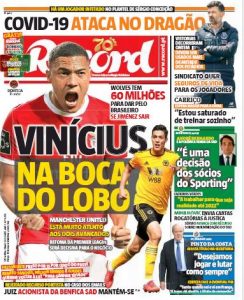 Wolves would count on the help of agent Jorge Mendes to find a deal. The representative was the one who told Benfica that the Molineux side are about to put an offer on the table. It’s claimed he’s working both on the departure of Jimenez and on the arrival of Vinícius.

Record says the agreement is now in the hands of Benfica president Luis Felipe Vieira, who’s been informed that the return of the Premier League will be crucial for the transfer.

In case the official accepts to let Vinícius go for less than his €100m release clause, then it’s stated there should be an deal between the clubs. Even if Vieira plays a little hard and demands more than €60m, it’s said Wolves could use some extra money to get the Brazilian.

These claims are certainly big, but the amounts mentioned seem high, and it’s worth noting the player has been the subject of repeat transfer rumours recently.