Real Madrid have identified Ajax’s Donny van de Beek as one of their summer targets, if they fail to land Paul Pogba from Manchester United.

Mundo claim several reports in Spain have reported a €50m offer from Real Madrid, however, they seem to be misrepresenting what has actually been reported.

Journalist Miguel Rico, writing on the last page of Mundo Deportivo, states Barcelona are also looking at the 22-year-old.

His name is ‘still on the table’ at the Camp Nou after the La Liga champions failed to land his teammate Matthijs de Ligt.

Ernesto Valverde’s side could turn their attention towards Van de Beek, if one of their current midfielders leaves the club.

Besides Van de Beek’s quality and understanding of the game, Rico claims he has also shown something which Barcelona midfielders have failed to deliver: Goals. 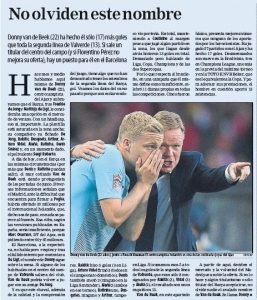 The Dutchman netted 17 times in all competitions last season.

Real Madrid and Barcelona both have the player on their agenda, but it doesn’t feel like either are going full throttle for a signing just yet.