Home Europe Player to wait ‘until the end of the season’ to make his...
SHARE

The growing Gerard Deulofeu theme at the moment is that the player’s transfer decision may not be quite so straightforward as expected. Barcelona hold a €12m buyback clause with Everton, but Deulofeu doesn’t have to accept the move if he doesn’t want to.

Of course, given that he couldn’t get off the bench under Ronald Koeman, it’s unlikely Deulofeu would turn Barcelona down to stay at Everton, but things aren’t that simple.

Excelling at AC Milan and being treated excellently by the Italian media, Deulofeu may choose to remain where he is rather than becoming a bit-part player at Barcelona again. Milan would have to agree a transfer fee with Everton, but would be under big pressure to do so if Deulofeu finishes the season well.

That could also help Everton’s bargaining hand, and given Barcelona can’t buy the player and then immediately sell him on, the Premier League club may end up with a better deal than many expected. 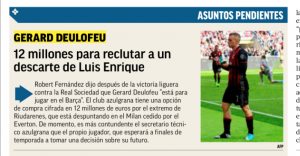 Milan’s takeover has finally gone through and the club’s new owners will be under the spotlight, which again could help Everton.

Spanish newspaper Marca say Deulofeu will wait ‘until the end of the season’ before making his mind up. Everton will surely hope he decides to say no to a Barcelona return.