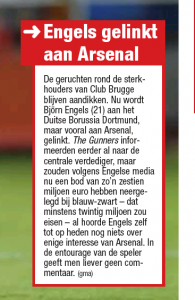 Belgian newspaper Het Belang van Limburg have a small article in their Monday edition on rumours about Bjorn Engels and Arsenal. They say that according to British rumours, Arsenal have submitted a €16m offer for the Club Brugges defender.

The newspaper have contacted Engels’ entourage, who have absolutely no idea about any of it, but they didn’t want to comment directly.

There may be a very good reason for the lack of any Engels knowledge, the bid likely doesn’t exist. From what we can see, the rumour started on social media attributed to ‘Belgian sources’, but in Belgium it’s attributed to ‘British sources’.

Another Belgian newspaper, HLN, also cover the rumour in their round-up, and put the offer at €15m, the differing figures likely down to exchange rates, with the original claims starting in £s.

Whilst this particular rumour may not have much to it, Engels has been the subject of interest from other clubs over the past six months or so. The 21 year old was called up to Belgium’s Euro 2016 squad by Marc Wilmots, but was forced to withdraw due to injury.

A right footed central defender, Engels can also play a defensive midfielder if required. He extended his Club Brugges contract in July, and it lasts until June 2020.