Earlier today, we covered claims from Defensa Central that explained Manchester United are ‘determined’ to sign Raphaël Varane and are ‘willing to offer’ him an ‘astronomical salary’.

It was also stated the defender is not convinced with the renewal proposal made by Real Madrid and is demanding more. The France international’s contract expires in 2022.

Tuesday’s edition of Marca again explains Los Blancos have proposed a new deal to the 28-year-old, but they are yet to receive response from him or his agent.

The La Liga side’s desire is to retain the centre-back, but they are running out of time, especially when he has proposals from the Red Devils and Paris Saint-Germain.

Varane currently earns €5.5m per season and Real Madrid’s new offer will improve his salary. On the other hand, both United and PSG can offer him a ‘superior contract’, if he decides not to sign an extension at the Bernabéu.

The newspaper explains the finances are not the only factor that will be considered when the former Lens man makes a decision on his future.

The possibility of experiencing a new country, culture and ‘ways of understanding football’ could be factors that will be taken into account by the 28-year-old, who has won everything with Real Madrid. This may give Manchester United an edge over PSG since he has already played in France.

For now, the World Cup winner is in no hurry and wants to focus on Euro 2020 with France. His ‘tranquility’ collides with his club’s plans for the summer. 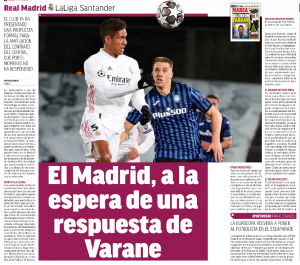 Carlo Ancelotti has returned to the club at the start of this month, and the Italian could also ‘weigh in’ on the final outcome of player’s future.

Manchester United are in the picture to sign Varane, and Marca, like Defensa Central, state Ole Gunnar Solskjaer’s side can submit a tempting proposal to convince the Frenchman.