Following a loan spell from Southampton back in January, the player had become a free agent in the summer and recently signed a four-year deal with the Gunners.

Funny thing is that the 28-year-old hadn’t made a single appearance during the loan, as he’s struggled with injuries for a few months. So when signing him permanently, Arsenal have shown their trust on him, and he’s grateful for it.

“There was the possibility of coming to Arsenal at the end of the season or joining me in January. Thankfully, it was this way because this period allowed me to be involved with the group”, Cédric Soares told Record.

“Arsenal are in a process of evolution, they showed they trust me and they presented me with a very interesting project. The confidence of the club was shown through the contract, which made me very happy.”

Despite his previous experience with the Saints, Soares claims he’s joined a new level of club by moving to Arsenal.

“I’ve been in England for a few years, I know the league well, but of course there’s always an adaptation. Arsenal are a huge club with a great history and that’s why I was so excited to sign for the club. They have a very strong footballing philosophy and so far the adaptation has been excellent. I know the city, the league, and my teammates have helped me a lot, as well as the technical team and all the staff.”

Asked if the Gunners are the biggest club he’s ever played for, Soares agreed with it.

“Yes, without a doubt it’s the greatest. Since I was a kid I looked at England and Arsenal belonged to the top three year after year. I had the dream of playing for a team like Arsenal and I’m very happy to have reached this level.”

Cédric Soares has also been asked about the unbeatables’ team, and quizzed if the current squad is still very far from being that successful. 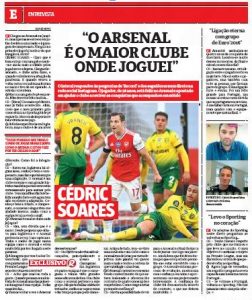 “The objectives haven’t been achieved, especially access to the Champions. In England only four teams are able to do this and we’ve seen big names being left out. A club like Arsenal belong to that group. You have to work on the coach’s idea, improve the processes and allow time because it can take time. Above all, there’s been an improvement and a club like Arsenal have to fight for those goals. This squad will want more and more and I’m sure it will achieve good things.”

Despite playing in red in England, the right-back was also asked if he’d ever use that colour back in Portugal, but he promises that in that case, he’d only return to his former club.

“If I go back to Portugal, I’d go back to Sporting. There would be nothing else in mind.”