One of Slaven Bilic’s summer signings, following the failures of attracting players like Alexandre Lacazette and Michy Batshuayi to the London Stadium, Simone Zaza’s time at West Ham is one well worth forgetting.

The Italian striker, who arrived on a paid loan with a view to buy from Juventus, only featured 11 times for the Hammers during his five months in London, failing to score or create a goal in the process. 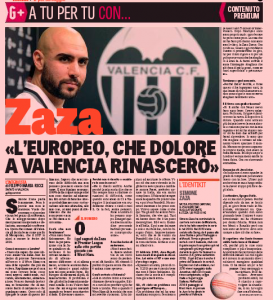 Not wanting to pay the €20m if he reached 14 appearances, West Ham stopped playing him, and Juventus were forced to find their loanee a new club in January.

Valencia came along, and after much deliberation, the 25-year-old eventually signed for Gary Neville’s former team on loan until the end of the season.

Only playing 32 minutes of football for the La Liga side so far, Zaza gave an interview to Gazzetta dello Sport on Friday about his time at West Ham, and what went wrong for him in London.

He said: “Once I realised that I need to leave Juventus, I decided to prove myself abroad, and West Ham were the team that wanted me most. Quickly, though, there were aspects I couldn’t adapt to: environmental, cultural, food, training.

“I’m not playing the victim. I’m know I’m a footballer who earns a lot. I’m just trying to explain the reasons behind this failure. I knew there would be difficulties, but I never thought there’d be so many, and I’m not blaming anyone: 99% of the fault is mine because I didn’t manage to adapt.”

Now trying to relaunch his career in Spain, Zaza revealed he received offers as far back as October, which he refused because he wanted to succeed in London.

However, when West Ham made it clear they wouldn’t be spending the money to buy him, he didn’t really have a choice.

It was move or rot in the reserves for six months.