Home Europe Player opens up on Man United transfer, could be at Old Trafford...
SHARE

Jose Mourinho has made his feelings clear over Andreas Pereira. The Manchester United manager wanted the 21 year old to stay at the club this season, and had been against a loan exit, to Valencia or anywhere else, but the player’s persistence got him the move.

It’s not what Mourinho would have preferred, obviously feeling Pereira would have got chances over the season. The Manchester United manager has made a point of saying there’s a loan recall clause, meaning Pereira could transfer back back to Old Trafford on January 1st, should Mourinho activate it.

Speaking to Spanish newspaper Marca, Pereira was asked about that potential switch to Manchester United in the winter window, and explained what he says he knows: “I’m focused on Valencia, I want to be here and help Valencia all year, but I don’t know what United wants in the future. I want to help and do the best all year in Valencia.

“I don’t know, that’s (the clause) something between the clubs, I was told I was going to play here for a year and I don’t know about that clause.”

Something doesn’t seem right here. It would be odd for Mourinho to lie about the clause, but it would be equally odd for Pereira to not know about it.

During the January transfer window Sport Witness and others were repeatedly told Pereira didn’t have any idea about a potential Valencia move. That was plainly wrong, and this line of the player knowing nothing isn’t going to work.

If there’s a clause, Pereira must know about it. It’s probably better to side with Mourinho on this one, so there is a recall clause, and the youngster could return.

The alternative is Mourinho made the whole thing up or Manchester United haven’t been straight with him.

Asked about his departure from Manchester United, Pereira told Marca: “It was difficult because they wanted me to stay in Manchester, but for me, individually and to improve, the options to play were here. In Valencia I want to help, because at United I had little chance.

“It didn’t hurt (Mourinho publicly going against the loan). I talked to him before coming here. On the one hand I am very happy because he likes me and I think if he didn’t see me as a good player he wouldn’t have wanted me to stay. I think on the other side of 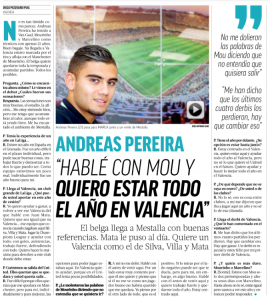 everything, that is the positive. If you look at it from the negative side it might be painful, but for me, however, it’s a good thing. I talked to him before coming here and I want to work hard and stay all year. I’m focused here.”

It’s clear that whilst Pereira could arrive back at Manchester United in January, that’s not what the player wants. Given Mourinho going against the loan publicly, and at the same time making sure everyone knows about the January clause, it seems bold for Pereira to repeatedly dismiss that prospect in an interview conducted less than a week later.

Still, playing at Valencia is probably better for the player’s career than not playing at Manchester United, and without knowing what Mourinho’s specific plans for Pereira were, and without predicting injuries in a crystal ball, it’s hard to see where a reasonable amount of game time would have come.