Liverpool’s match against Sevilla on Tuesday night was just so ‘Liverpool’.

Showing brilliant attacking play, a wobble, deficiencies to be seen at the back, and a good result to ultimately slip through the fingers.

Jurgen Klopp may have been pulling his well stocked hair out on the sidelines, but he’s as culpable as the club generally for the lack of a quality defensive reinforcement. It’s all very well Klopp insisting on Virgil van Dijk or nobody else, if he actually gets his man, but given it was increasingly clear he wouldn’t it looks poor planning.

If the lightbulbs in the Anfield dressing went out, and the caretaker wasn’t able to source the brand he prefers until January, or even next summer, he’d hardly keep everyone waiting in the dark out of principle. 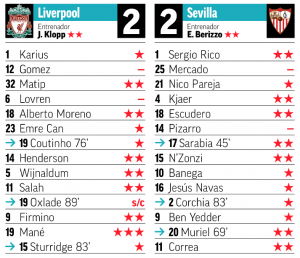 Marca have been enthralled by the big Champions League night on Merseyside, their match review starts off with the following: ‘Anfield, scene full of history and it puts the hairs on end when the fans grab their scarves and sing their song.’

It carries on in a similar vein, the ‘irresistible’ atmosphere providing a pressure for Sevilla’s players, only to then be matched by Liverpool’s attacking play.

But then comes the defence, and it’s fair to say Marca weren’t so impressed. Alberto Moreno had a good game, dressed in some quarters as a second coming, but Marca have given – ratings to Joe Gomez and Dejan Lovren, the latter credited with a ‘terrible failure’ for Sevilla’s opener.

There’s no stars for either.

A couple of Sevilla players join them in the bin, Gabriel Mercado and Guido Pizarro.