Well, the Portuguese press didn’t see that coming. Although all the local outlets expected William Carvalho to be moving to England or France soon, especially after his West Ham saga, it seems the offer is coming from somewhere else.

This weekend, agent Paulo Teixeira has revealed on Facebook the midfielder actually has an offer to leave Sporting for China. Many local papers are covering it today, including Correio da Manhã and Jornal de Notícias.

The bid would be ‘only’ €24m, but the most attractive part is the salary: William would make €6m per season there, many times what he currently earns in Portugal. That’s why the negotiations for a new contract would have stopped, putting the club into pressure. 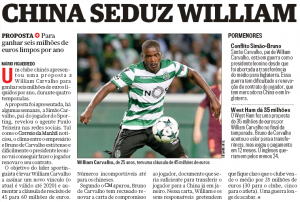 The newspaper recalls that West Ham’s offer was much better, since the London club wanted to pay €35m. Problem was that the Hammers wanted it do be done in 24 months, while Sporting demanded 12.

So this situation should still mean a lot for West Ham, or whoever wants William. With the Chinese transfer window only opening in January, just like in Europe, there would still be time to overcome this bid.

There’s no doubt the player would rather play in England than China, and this pressure to accept an offer will certainly make Sporting consider a bigger one if it comes.

So although things seemed more difficult for West Ham since the player started negotiations for a new contract, things have changed again. But they better move quickly.

Chelsea loanee ‘trying to convince’ current club to keep him –...