Kevin Mbabu came to the consciousness of many recently when he put in a great performance for Switzerland against Belgium.

In one of the best matches of the UEFA Nations League group stages, Switzerland went 2-0 down to a brace from Thorgan Hazard.

The Swiss came back to win 5-2, with Mbabu one of his country’s best performers. It’s led to transfer rumours and for the 23 year old it shows his career is very much back on track.

Mbabu signed for Newcastle United in January 2013, at the age of just 17.

He didn’t breakthrough at the club, and as explained by Swiss newspaper 20 Minuten, he was taken off after half time in an October 2015 match against Manchester City and didn’t know he’d only go on to play a single further minute for Newcastle in the Premier League.

A loan offer came in from Young Boys in the 2016 summer window. Newcastle asked for ‘a whopping £24k for the year long deal’.

Young Boys agreed, but Mbabu wasn’t sure, thinking a return to Switzerland was a step backwards. He finally agreed, did well, and a year later a permanent transfer was negotiated for €120k. 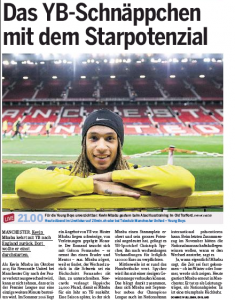 20 Minuten say the fullback is ‘now worth around 100 times that’. That would be €12m, not a ridiculous estimate for the Swiss international.

Set to face Manchester United at Old Trafford tonight, Mbabu has a ‘triumphant return’ to England, having been turfed out at Newcastle as not good enough.

A transfer is expected over the next couple of windows.