The striker has been with the Championship side since 2016, and overall his scoring record with the club isn’t so bad.

In the 2016/17 season he found the back of the net 19 times in 36 league matches, and then his last campaign was ruined due to an ankle injury which ended up requiring surgery.

So far during the current season he’s started 17 matches in the Championship, with a further nine as a substitute, and found the back of the net on six occasions, adding two assists.

No longer a regular starter, Ouest France believe a loan move is possible. 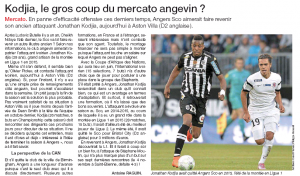 A return to previous club Angers is on the agenda and contact has been made. Things aren’t advanced at this stage, and Kodjia hasn’t yet made his mind up, but it’s said things ‘could accelerate’ over the coming week.

That’s after the 29 year old holds a meeting with the ‘leaders’ at Aston Villa, a chat which will help make his mind up.