Alex Sandro has been quoted by Gazzetta dello Sport saying he’s concentrating on Juventus and the World Cup, which he hopes to be called up for, and not letting transfer talks play on his mind.

The Italian newspaper only reference Chelsea and say the Premier League champions made a €70m offer for the player in the last summer window.

Still clearly a theme in the Italian media, it’s the Chelsea attempt which is continually returned to, and Sandro explained: “I have always remained focused on my work and my only thought has always been Juventus, with whom I still have two years of contract. I feel really good and I am satisfied with my condition today. 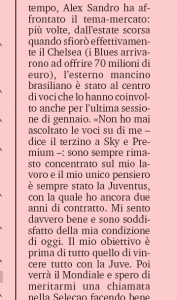 “My goal is first of all to win everything with Juventus. Then the World Cup will come and I hope to deserve a call in the Seleçao by doing well here.”

Juventus may have missed their chance to get €70m for the player, if the Chelsea offer actually happened.

It’s a big fee for a fullback and with Antonio Conte’s side signing Emerson Palmieri from AS Roma during the winter window, it could be doubtful whether they’d return.

In January there had been suggestions in Italy that Sandro could be available for the right price, and at that time the estimates were around €60m, quite a bit less than Chelsea allegedly had refused.