Everton have been brought into the Quincy Promes picture, which will also hold some interest for Southampton.

Earlier this month, we covered a story in Russia that Southampton were not keen to meet Promes’ €30m release clause, an amount that would’ve risen to near €35m because the Dutch forward was entitled to 15% of the transfer fee.

Then, on Tuesday, a Sport Express journalist explained the Saints were actually reluctant to go that high because they weren’t impressed with his performances in the Champions League this season, clearly feeling it was a closer level of football to England’s top tier than the Russian Premier League.

Southampton were said to have stopped their bidding at around €27m, yet Sofiane Hanni, who signed from Anderlecht with Spartak Moscow towards the end of the transfer window, explains he heard more money was offered. 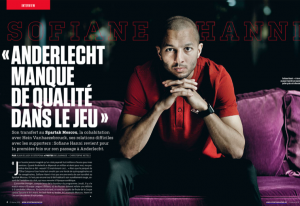 Speaking to Sport/Foot, he said: “A few weeks ago, Spartak refused a €30m offer from Southampton for Quincy Promes, one of the best players in the team. I also heard Everton were interested.”

The fact the Toffees were also sniffing around isn’t really a surprise considering they have been searching around for someone to put the ball in the back of the net, a trait Promes is known for in Russia, having scored 15 goals and picked up eight assists in 26 appearances.

Sam Allardyce and Everton eventually settled on Besiktas’ Cenk Tosun, although the 26-year-old has yet to score a goal in his first three appearances for the club.