The La Liga winners are looking for an immediate signing after losing Luis Suárez and Ousmane Dembélé through injuries. The Frenchman will miss the rest of the season.

Sport now explains Ángel is the ‘favourite’ target for the Catalan club because other targets, like Pérez, Real Sociedad’s Willian José and Real Betis’ Loren, have fallen down the order after their clubs decided against negotiating a transfer.

Therefore, the Getafe attacker is ‘best placed’ to fill the void left by Dembélé’s injury. The deal could be announced next week once Barca have the approval of the RFEF Medical Court. The latter need to verify the time needed for the World Cup winner to recover. 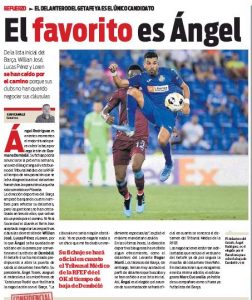 There will be progress once Barca get to know the verdict from RFEF Medical Court.

Sport adds the negotiations are so advanced that Getafe players have already taken Ángel’s move to Barcelona for granted.

Another Spanish newspaper AS also explains Ángel is the ‘real option’ for Barcelona.