Chelsea, Arsenal, Newcastle United, Leicester City and Manchester United ‘have been interested’ in Philippe Coutinho, according to Mundo Deportivo.

The newspaper also adds Tottenham Hotspur have ‘emerged’ as a contender for the Barcelona owned player.

He is currently on loan at Bayern Munich and the 27-year-old’s desire is to extend his loan deal until August, so that he can feature again in this season’s Champions League.

The former Liverpool star’s priority is to return to the Premier League after his temporary spell with the Bavarian club.

Prior to joining Bayern last summer, the Brazil international was wanted by Spurs when Mauricio Pochettino was in charge at the north London club.

The Argentine was replaced by José Mourinho last November and despite that, Coutinho ‘does not rule out Tottenham’. 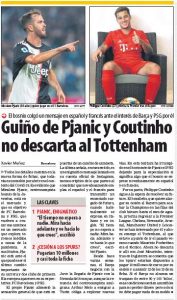 fee to Barca and also offer €12-15m per year in wages to the player.

If the La Liga winners fail to receive an offer of €90-100m for the playmaker, Barca will accept the aforementioned figures for a loan deal, provided they don’t have to pay his salary.