The whole world knows it, and following the Champions League draw, the Spanish sport media are falling over themselves to explain just how excellent Jurgen Klopp and his side are.

Atletico Madrid will prove a tough task for the Reds, yet the slant, from Marca especially, puts that to one side for now and concentrates on praising the current Premier League leaders.

For a Spanish audience it’s made clear Klopp comes above all the star players at Anfield, it is he the club’s fans look towards after he turned ‘a sleeping giant in a depressive state to a colossus that scares in England and in Europe’.

Marca say Klopp shares a ‘pedestal with Shankly and Paisley’ and ‘The Normal One never walks alone’. That’s not all, they go on to say the manager has ‘been integrated into the working class of Liverpool, among the Docks and pubs, being already one more scouser’. 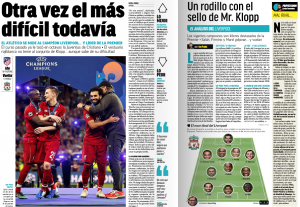 There were always going to be Beatles references, as there is any time the Merseyside club face a Spanish side, and Marca state ‘Klopp’s rock triumphs in the cradle of The Beatles’.

Near enough every Liverpool player is singled out for praise, yet the Spanish newspaper make it very clear the triumph of this team is all about the collective, and that includes the followers of the club.