A theme of this season so far has been managers complaining about the fitness of their players, given a lack of rest.

Manchester United are the Premier League club who had the shortest recovery period during the summer, followed closely by neighbours Manchester City, and that was down to their involvement in the latter stages of UEFA competition.

PSG got to the final of the Champions League, but they did have rest before that given Ligue 1 didn’t resume matches following the Covid-19 break.

Thomas Tuchel has been repeatedly vocal about his players not yet being up to speed, and lacking top fitness. PSG drew 2-2 with Bordeaux at the weekend, and L’Equipe says the performance was ‘not reassuring’ ahead of the match against Manchester United.

Kylian Mbappe, for example, was rated so poor that the French newspaper only gave him 3/10 for his performance. The match ‘confirmed’ the team are in ‘poor physical condition’ and it’s obviously a worry ahead of the tie at Old Trafford. 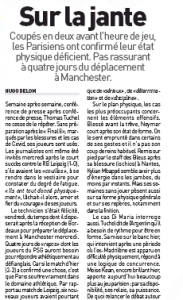 L’Equipe state: ‘Week after week, press conference after press conference, Thomas Tuchel keeps repeating it. Without preparation after the “Final 8” (the matches at the end of the Champions League), marked by injuries and cases of Covid, his players are worn out.’

Tuchel will be hoping the few days of rest ahead of Wednesday’s game will see his team in good shape to face Ole Gunnar Solskjaer’s Manchester United.