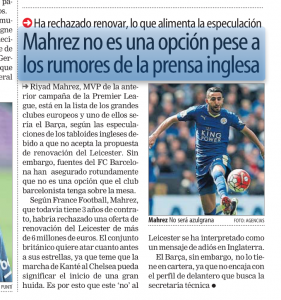 Mundo Deportivo headlined an article: ‘Mahrez is not an option despite rumours in the English press’

With Mundo Deportivo being, at least in our opinion, more reliable and less sensationalist than Sport, it’s probably worth listening to them a little more.

The newspaper explain that Barcelona don’t have Mahrez in their portfolio of targets, he doesn’t fit the profile which technical secretary Robert is looking for.

Barcelona have several players who can perform the Mahrez type role, and therefore they don’t need to be spending big fees, or any fees, in that department.

That’s one less club for Leicester City to worry about, as they continue to try and keep the stars of their Premier League winning season.

Jamie Vardy turned down a transfer to Arsenal, but French midfielder N’Golo Kante has already left Leicester for Chelsea.