Arsenal’s poor run in recent games was further extended after the Gunners suffered a 4-1 defeat at the hands of Manchester City in the EFL Cup quarter-final clash on Tuesday.

The north London club’s only positive from this season is that they have won all six of their group stage fixtures of the Europa League. However, they’ve failed to replicate the same form in the Premier League.

Mikel Arteta’s side have managed only two wins since the end of September and their last league win came against Manchester United on November 1st. Since then, the Emirates club have picked up only two points from the last seven league matches.

After Arsenal’s defeat to Tottenham Hotspur at the start of this month, reports from Spain stated the former Manchester City assistant manager’s position at the Emirates is in danger. 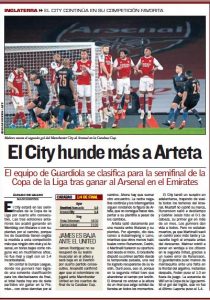 Wednesday’s edition of AS discusses City’s latest win over Arsenal, and also talks about Arteta.

AS state Arsenal’s ‘negative streak continues’ and the ‘questions continue to haunt the figure of Arteta’, who ‘cannot wake up his squad’ despite the changes he made to the starting XI to face Pep Guardiola’s side.

Another Catalan newspaper, Mundo Deportivo, says ‘Arsenal surrender to City’ as the Citizens reached the EFL Cup semi-final for the fourth year in a row.

Regarding the meeting between the two sides, Mundo states: ‘City rummaged through Arsenal’s wound yesterday, a team that has lost all its grandeur.’ 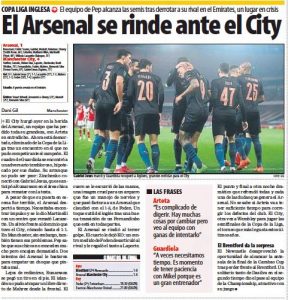 On the London club’s poor run, Mundo adds:  ‘The end to another dramatic night that endorsed each and every one of the doubts generated by Arsenal. It is not known if Arteta will have enough time to correct the club’s flaws.’

Arsenal host Chelsea in the league on Boxing Day and a defeat against the Blues would put Arteta’s job at Emirates in further danger.

West Ham made ‘enquiry’ for Dutchman ‘in last few hours’ –...