Mikel Merino returning to Spain is a theme which has now been building strongly in the Spanish media for several weeks.

There have been multiple claims of people close to the player sharing information he wants to leave Newcastle United, and this is the case for both the Basque and Seville media.

Up in the Basque, Athletic Club Bilbao and Real Sociedad are said to be keen on signing the footballer and down in Sevilla it’s Real Betis. Those three are among five Spanish clubs who want to sign Merino this summer, the other two are unnamed for now.

Merino stories appear every day in Spain at the moment, usually several of them, and the Newcastle player is on the front page of Wednesday’s edition of Estadio Deportivo. 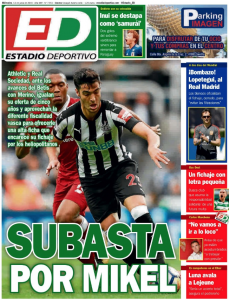 Interest from the clubs mentioned is covered and it’s stated all are willing to offer the player a five year contract to switch to La Liga.

On top of that, Merino would also be assured of prominence within the team.

A transfer is thought to be worth around €10-12m, which seems a little on the low side, and Estadio Deportivo report Merino hasn’t decided which of the Spanish clubs to join.