Jose Mourinho’s increasingly difficult start with AS Roma could open the door to a move to Newcastle United.

That’s what Il Messaggero hint at today, saying the Magpies are in the background for the Portuguese boss with rumours of a €20m bid for his services.

The newspaper covers the increasingly toxic situation at Roma in regards to Mourinho, whose methods are now being seen in all their ‘splendour and misery’.

The ‘honeymoon is over’ as far as the Italian side are concerned, and there aren’t many choices about what happens going forward.

The heavy and embarrassing defeat in Europe this week means Mourinho is under focus, and his antagonistic style is being questioned once again.

He’s always worked this way, provoking tensions to get rewards, but it’s not working at Roma, and they now find themselves at a ‘crossroads’. Either they back him and share his criticisms of the squad or ‘judge him as an annoyance’ and get rid.

The latter may be the easiest option, for a number of reasons, but chiefly because of Newcastle, who are hovering in the background.

They are ‘behind him’, say the newspaper and there are rumours of a €20m bid in the pipeline, meaning everyone has to ‘keep an eye on the map’ in terms of the Magpies. 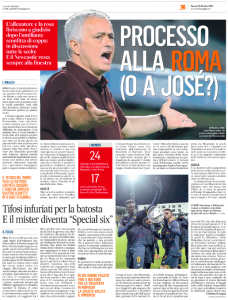 Those comments certainly had an air of wink wink, nudge nudge them, and the situation at Roma could easily open the door for a move.

It’s all hypothetical at this point, and it will depend on Roma’s management, who have a decision to make about Mourinho, who has quickly fallen into old habits and yielded the same results as before.