Over the past few weeks, we have seen various reports state Lille have rejected Newcastle United’s offer for Sven Botman as they want to retain the defender beyond the winter market.

The Magpies are keen to strengthen the centre-back position in January and one of the names included in their target list is Torino’s Gleison Bremer.

Since swapping Atlético Mineiro for the Serie A side in 2018, the 24-year-old has grown from strength to strength, so much so that he has attracted interest from clubs in Italy and England.

This includes the Tyneside club, who are leading the chase from England. Tuttosport have ‘Newcastle offer’ on the front page of today’s newspaper, but Bremer said ‘no to €30m’.

Within the report, it’s explained the Italian club are working to extend the player’s contract and Eddie Howe’s side tried to scupper their efforts.

Newcastle are unlikely to succeed as Tuttosport state the South American’s ‘renewal is just around the corner’. 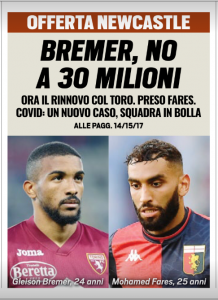 It’s claimed the two parties have ‘found a substantial agreement’ to extend the contract from 2023 to at least 2024.

The new deal will also see Bremer triple his wages to €2m per year [after tax, and including easy and achievable bonuses].

Torino and Bremer are close to agreeing a new deal and this should end Newcastle’s hope of signing the Serie A defender.