Following the sale of Fabian Ruiz to Napoli in the summer, Real Betis needed to find the next gem they could potentially cash in on down the line, and that man appears to be Junior Firpo.

Born in the Dominican Republic, the Spain U21 international has been in terrific form of late for the La Liga side, which has attracted a lot of interest from England, including Manchester City.

However, Pep Guardiola’s side have yet to make a move for the 22-year-old, leaving the door open for other clubs, such as Newcastle and Crystal Palace, to start sniffing around more attentively.

ABC Sevilla are the ones with the information on Tuesday, claiming both the Magpies and the Eagles have turned their attention to Junior, as he’s referred to more commonly, who has a €50m release clause.

Not only have both Newcastle and Crystal Palace sent scouts to watch him recently, but the Spanish outlet state the pair have ‘enquired’ about his situation as well. 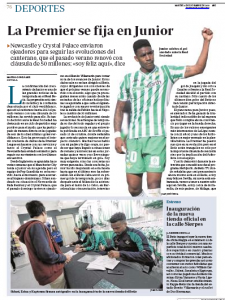 Official moves have yet to be made by either side, although Betis are said to be quite ‘calm’ about the situation, not only because of the release clause but also due to the fact the player is very committed to his club, at least for the current season.

The left-back/left-midfielder (Betis play with three at the back) is quoted as saying how happy he is in Seville, being so close to his family and wanting his pregnant girlfriend to give birth to their child in the city.

However, recently asked about interest from other sides, Junior made it clear that he had told his agent he ‘didn’t want to hear anything’ during the season, just so he can focus on his football.

But, when the transfer window opens… He said: “Until then, nothing can happen. It’s 100% true that I don’t know anything. I told my agent clearly that he isn’t to tell me anything. Maybe he’ll inform me on January 1st.”

That’s probably when he’ll be given a choice of either playing for Rafa Benitez or Roy Hodgson in the Premier League (if they are willing to meet the release clause).

Over the past four games, Junior has scored three goals and provided one assist for his teammates.