Tahith Chong’s first half of the season didn’t go to plan, with the 21-year-old having a difficult loan period at Werder Bremen.

When he arrived at the Bundesliga club from Manchester United, the signing was surrounded by much fanfare, with fans encouraged to be excited.

In the end, Chong only got 499 minutes of action, scoring one goal and adding two assists, and that wasn’t enough for his parent club.

Manchester United decided to end the move early and to then send Chong on loan to Club Brugge instead. Things have started off well in Belgium, and there’ll be hope for that to continue.

The youngster made his debut on Wednesday evening as Club Brugge beat Olsa Brakel 6-1 in the cup, with Chong one of those who found the back of the net.

After the match, manager Philippe Clement spoke to the media, and sounded positive about a potential longer stay for the Dutchman.

Quoted by HLN, he said: “You can see that he has had a good education. Tahith picks up things faster than boys who have had a less good education. Or than players who come from another continent. It all goes faster with him. If you tell him something, he answers.” 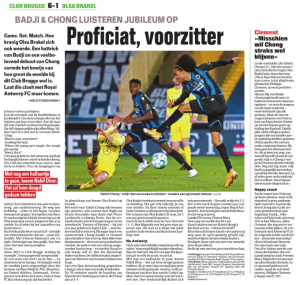 Specifically on Chong being contracted to return to Manchester United in the summer, he stated: “Maybe he doesn’t want to leave later, maybe he wants to stay here.”

Such an outcome would be a surprise, especially if Chong excels.